Arbopolis will contribute to strengthening African poor people’s livelihoods through better knowledge, promotion and harnessing of IFTS, using a participatory approach centered on the main project stakeholders as active agents and researchers, within a multi-disciplinary framework. The project focuses on a socio-economically important IFTS, Dacryodes edulis (Burseraceae) more commonly known as the African plum tree or safoutier/prunier in French. ARBOPOLIS aims to : (i) acquire a better knowledge of the species for its promotion and sustainable management ; (ii) develop public awareness activities on the interplay between human management practices and species diversity. 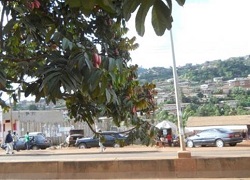 The project aims to characterize :

Besides getting new knowledge, Arbopolis will strengthen stakeholders’ engagement in urban agroforestry through co-production of knowledge, awareness raising and social learning for IFTS contributing to local diets, by collaborating with safou’s value chain actors, including municipalities and primary/secondary schools from Yaoundé.

African plum trees are economically and culturally important for Cameroonians. Fruits can be cooked in different ways. During the fruiting season, up to 10 fruits can be consumed per day by locals. Consuming 6 fruits covers one fifth of proteins and lipid daily intakes, and more than 50% of mineral needs for Zinc, Magnesium and Copper. Many varieties are recognized predominantly based on fruit morphology (size, colour, shape). 25 sensory descriptors were defined by a panelist and used to characterize consumer preferences. Generally, consumers prefer big and non-acid fruits. A rich nomenclature is used by local people to name the fruits, and these names are often related to fruit morphology (size, skin color) and taste. Most often seeds used for plantation are not coming from farmers’ own field, but are given by a neighbor or are coming from the market. In the city of Yaoundé, seeds used for plantation frequently come from more than 50 km away. The genetic diversity of the species is quite homogeneously distributed across the country, suggesting a large seed exchange network with no strong barrier related to ethnicity. African plum trees planted in the city present a large genetic diversity background, equivalent to what can be found in urban areas. This illustrates the role played by urbanites on species genetic diversity dynamic.