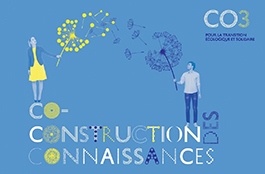 The "Co-construction of knowledge" (CO3) programme is a French experimental scheme supported by five donors (ADEME, the Charles Léopold Mayer Foundation, the Daniel and Nina Carasso Foundation, the Fondation de France, and Agropolis Fondation). It aims to promote participatory research and publicize the robustness of its results, to capitalize on methods and approaches for co-constructing research between actors from different spheres and, finally, to disseminate the lessons of this type of research.

Two categories of projects were eligible:

A second wave in July 2019 A second call for proposals, under the CO3 programme, was launched in July 2019. It takes up the main lines of the previous call, namely:

Agroecology and peer certification, SAGITERRE and COMPAIRS projects funded Seventy-nine projects were submitted, including 33 on the agroecology axis. Four projects from the AGRO community were selected, of which two will be funded: