In the last years, increasing evidence recognizes that bacterial endosymbionts are major players in the evolution of plant-eating insects. But the long-term consequences of these interactions and their role in the environmental transitions experienced by their hosts are seldom explored in a phylogenetic framework.

The association of aphids with Buchnera aphidicola, established 150 Mya, is one of the most persistent obligate symbioses known to date. However, recent studies have shown that in a few species of the genus Cinara, this relationship has evolved into a “ménage à trois”, in which a former facultative endosymbiont, Serratia symbiotica, performs some of the functions usually fulfilled by Buchnera.The aim of the project is to elucidate the long-term evolution and maintenance of symbiotic associations in conifer-feeding aphids (Aphididae : Lachnidae : Cinara) and determine the contribution of bacterial symbionts in shaping the distribution patterns of this highly diversified aphid genus. 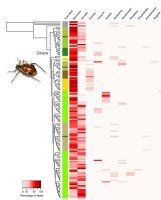 Most Cinara species host both Serratia and Buchnera but, in several clades, endosymbionts related to Sodalis, Erwinia or an unnamed member of the Enterobacteriaceae have replaced Serratia. These findings confirm that the species of this genus require a co-resident symbiont to complement Buchnera in its nutritional role. Results further demonstrate that co-symbiont replacement is not associated with the adaptation of aphids to new ecological conditions.

It shows that symbiont replacement has repeatedly occurred during the diversification of Cinara. The succession of essential symbionts does not result from the adaptation of the hosts to changing ecological conditions. It might therefore be driven by factors intrinsic to endosymbiosis such as rapid genome deterioration or the competitive displacement of symbionts providing benefits to the host.