Pesticide spray drift is a great concern because of both human and environmental impacts. Drift reducing measures in Europe generally encompasses vegetation stripes along water courses combined with drift reducing techniques such as air induction spray nozzles. Up to now the drift reducing capability of spray adjuvants is not really considered by regulators. The in-field measurement of spray drift is subjected to high variations due to wind conditions but indirect measurements through droplet size are considered as a relevant estimator. Wind tunnel meaqsurements offers an alternative with controlled wind conditions but a specific protocol was to be implemented.

This project aimed at defining the drift reducing potential of spray adjuvants composed of oil in water emulsions (oiw) from droplet size measurements with a light diffraction device Malvern Spraytec scanning the flat fan spray along its long axis the evaluation of the potential spray drift in a wind tunnel with the implementation of a short duration spray protocol.

A conventional spray nozzle FF 110° 03 - 3 bar was considered to study the effects of an industrial oil in water emulsion adjuvant.

Droplet size measurements The effect of the composition of an oil in water emulsion was visible on the droplet size population located in the center of the spray (x=0 Figure below) after Vernay et al., 2016. The average median volumetric diameter (Dv50) raised from 150 µm for water up to 190 µm (emulsion 1.3% w/w). Meanwhile the reduction of the fine droplets fraction (V150) dropped from 45% (water) to 33% (emulsion 1.3% w/w).

Development of a protocol in a wind tunnel The test of adjuvants in IRSTEA wind tunnel needed to modify the experimental setup so as to work with short duration sprays (10s) with a limited wind speed (2-4 m s-1). The ground deposition at distances of 2-3-5 and 7 m downwind was evaluated through the dosing of a fluorescent dye. This protocol was first validated with pure water and different nozzles. An industrial oiw emulsion (0.3% w/w) was selected after droplet size measurements and tested at wind speeds of 3 and 4 m s-1 with 10s spray duration – 3 to 5 replicates. The results did not show a significant effect of the emulsion compared to water. The results obtained are encouraging from a methodological point of view. Oil in water emulsions of interest were selected throug droplet size measurements but the global modification in the droplet size distribution was not great enough to involve a significant reduction of the sedimentation drift.

Further works are envisaged to investigate the driftability of oil in water emulsions and their dependency to droplet size distribution. 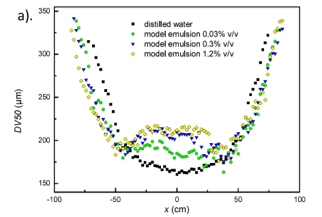