Recent discoveries suggest that Amazonia might have been more intensively impacted by humans than previously thought. Notably, the contemporary distribution of genomic diversity of hyperdominant crop species that have been used by humans for millennia in wild forests landscapes may still bear the traces of pre-Colombian societies, and would result from a complex inte

The aim of this project is to lead a proof-of-concept study to test how pre-Colombian societies have influenced the genomic diversity of four palm species of high agronomic value and suspected formerly domesticated in French Guiana : Oenocarpus bataua, O. bacaba, Astocaryum sciophylum et A. paramaca (Arecaceae, Arecoideae). In this project, we address the question ‘How have natural and human-mediated evolutionary processes shaped the genomic diversity of wild populations of crop palms in ancient agro-ecosystems of Amazonia ?’ through two main axes of evolutionary genomics : selection genomics (climate adaptation and domestication) and biogeography (gene flow and demography). 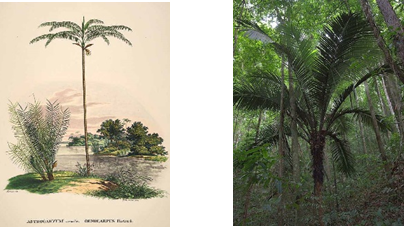 We will carry out an exploratory analysis of the distribution of genomic diversity in wild (currently undisturbed) populations of four indicator palm species of the genera Oenocarpus and Astrocaryum widely distributed in French Guiana (FG).

We will design a custom gene capture experiment to sequence a large panel of candidate genes for domestication and adaptation (up to 20’000 exonic regions). Hundreds of palm specimens will be sampled sampled according to an original sampling design (replication of a local contrast ‘undisturbed’ versus ‘anthropised’ plots along a steep rainfall gradient) and sequenced with an Illumina HiSeq 3000 technology.

Methods of evolutionary genomics will be applied to decouple the effects of past natural and anthropogenic evolutionary processes acting at multiple spatial scales (large-scale climatic adaptation on one side, local-scale combination of remainders of past domestication and demography on the other side) and to identify the genes that responded to natural and artificial selection.

Please be patient, data are under acquisition…

This project will be further extended to other regions of Amazonia (Ecuador, Peru, Colombia) and/or other species model from the genera Attalea, Syagrus and Bactris.