Adaptation to host-plants in Spodoptera

Several species in Spodoptera genus are infamous pests against very diverse crops due to their extreme polyphage. These pest species include S.frugiperda, S.littoralis, and S.litura. The genetic basis of adaptation of these species to crops can be useful information to make plans for pest-prevention. Rapidly developing sequencing technologies make it possible to identify precise targets of natural selection and the mode of adaptation.

In this study, we aim at finding the genetic basis of adaptation to host-plants in Spodoptera using whole genome analysis. For this, we will perform de novo genome assembling from S.littoralis using chromium sequencing. Then, adaptive evolved genes will be identified from S.frugiperda, S.litura, and S.littoralis from resequencing data generated by novaseq technology using population genetics analysis. Among them, genes that are potentially important for interactions with crop plants will be identified. And we will identify the process of natural selection on these genes for each adaptively evolved crop-gene by multi-species comparison. Finally, we will perform phylogenomic species from pest and non-pest Spodoptera species to obtain insight on how pest species emerged.

We reconstructed phylogenetic using 20X whole genome sequences from 15 Spodoptera species, including pest and non-pest tree (Fig.1). Then, we identified four loci targeted by recent selective sweeps in invasive S. frugiperda (Fig 2). These loci include genes playing a key role in host-plant adaptation, such as detoxification genes (CYP9A) or ordant receptor genes (OR13). Reduced length of LD in invasive populations demonstrates the importance of balancing selection during the process of adaptive evolution.

Following the genome assembly from S.littoralis, in which N50 is 1.035Mb (Table 1), we observed that a group of Egyptian populations invaded South Europe and South Africa (Fig. 3). This invasive can be promoted by host-plant adaptation. From S.litura, we identified 336 positively selected loci, which include 197 annotated genes.

We did not find any pattern difference between pest and non-pest species. 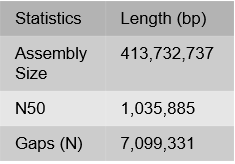 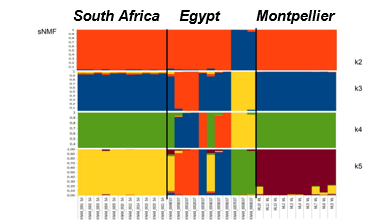