Agropolis Fondation and the European Commission (EC) has signed a €3M Grant Agreement to support the implementation of the One Planet Fellowship Programme on the occasion of the 3rd African Union-European Union Agriculture Ministerial Conference held at the Food and Agriculture Organization of the United Nations (FAO-UN).

Funded by the BNP Paribas Foundation, the Bill & Melinda Gates Foundation and the European Commission, the One Planet Fellowship is managed by AWARD and Agropolis Fondation. 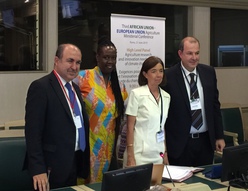 The One Planet Fellowship is a career-development programme designed to build and enhance the mentoring, scientific, networking and leadership skills of the next generation of climate scientists. It targets scientists working on the nexus of agriculture and climate change, equipping them to use a gender lens to help Africa’s smallholder farmers adapt to climate change.

The €3M grant is part of the European Union-led DeSIRA initiative. It complements the US$15M combined funding from the BNP Paribas Foundation and the Bill & Melinda Gates Foundation. EU’s DeSIRA initiative intends to enhance cooperation between the EU and its Member States with African partners on climate-resilient and development-smart innovation in agriculture for sustainable rural transformation, with a specific attention to strengthening national and regional agricultural research and innovation capacities, and promoting multi-stakeholder partnerships for enhanced and long-term impact.

The United Nations warns that climate change is costing communities and countries dearly today and even more tomorrow. The latest Intergovernmental Panel on Climate Change (IPCC) special report records that local communities dependent on agricultural livelihoods are at disproportionately higher risk of adverse consequences of climate change, with global warming of 1.5°C and beyond. Africa is particularly vulnerable to climate change with 70 per cent of its population dependent on agriculture for livelihoods. This calls for urgent concerted efforts towards developing relevant interventions to address climate change in Africa.

Deepening collaborative research is crucial for the common understanding of the complexity of climate change and its impact on agriculture. Many of the basic underpinning aspects of the required research are available – what is now needed is their in-depth analysis and development, and deployment of resulting strategies and practice over the African continent. This requires a strong commitment of African scientists and collaboration with non-African researchers, particularly from Europe as its nearest continental neighbor through its higher education and research institutions. In the medium- and long-term, African food and nutritional security is going to be especially vulnerable to climate change and especially in need of research on climate change adaptation. It is imperative that African scientists, particularly young ones, and international researchers can now develop the scientific skills to maximize the crucial future adaptations and mitigations for the African continent. 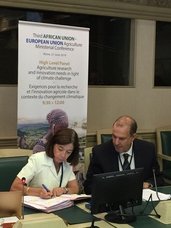 The EC funding will allow Agropolis Fondation to implement the Fellowship activities in Europe, in close coordination with those being carried out in the African continent. An important pillar of these Europe-based One Planet Fellowship activities include Advanced Science Training where African scientists are paired with European scientists and hosted, for a period of three to six months, in European universities, laboratories and research institutions with track record of engagement in Africa. It also includes scientific exchange between European and African Senior scientists acting as mentors to the One Planet Fellows as well as science-policy linkage sessions and seminar workshops in Montpellier where Fellows, mentors and mentees will meet, network and interact to explore further collaboration options.

The inaugural One Planet Fellowship Call has attracted more than 1,500 applications. Screening is underway to select 40 Fellows before summer 2019.