A participatory design of land policies has been designed then implemented in 2008 to transfer the abilities for autonomous scaling-up participatory analysis and foresight. Participatory simulating workshops based on a role playing game, help participants co-develop their own proposals for territorial management then test them (by simulating them) at different scales (local, regional, national). An autonomous scaling up and out process is thus launching throughout the country, where land tenure and use rules are progressively debated and co-devised, and end up to a “Senegalese Farmers’ Land Reform Guidelines”.

The endogenous process of proposing ‘self’ land policy rules reached a key step when in 2024 the different farmers’ simulating workshops in the country achieved to produce a common proposal of land uses and rights rules. At this stage, a national simulating workshop is required, to let farmers, experts and decision makers review together, by again simulating, farmers’ proposals. This social bottom-up process has been too quick: political time is quicker than funds mobilizing (for the technical support) procedures. Fortunately, Agropolis Foundation have additional funds for this kind of and unexpected, need.

Support the finalization of the Senegalese bottom-up process then the final dissemination of the research results: At the national scale (Senegal), support the national simulating workshop. between farmers, Agropolis and national experts, and decision-makers. At the international level, help to set efficient dissemination supports to share methodologies, results, and experiences from this successful research-action experience.

A national workshop for a large scale participatory simulation has been held (23-25 February 2015) in Senegal. It brought together (100 pers.) farmers, Agropolis (Cirad, Irstea) researchers, other french researchers (EHESS), senegalese experts, and decision-makers. At the international level, different supports has been designed to disseminate and share results and experiences: a “general public” version of the simulation game, and most of all a dedicated interactive website (open in march 2016: groundedchange.org), including a ‘general public’ movie presenting the results (in french: http://www.dailymotion.com/video/x28rttd_du-terroir-au-pouvoir_creation, in english: http://www.dailymotion.com/video/x28uyd9_from-communities-to-policies_creation).

Using the web site and the other ‘general public’ supports to launch an interactive sharing of knowledge, including scientific dialogue with society about the value of the different sources of knowledge, the value of interactions between them, and the relevant epistemologies, approaches and methodologies to support these processes. In particuiar, an on-line version fo the simulation game is in project. 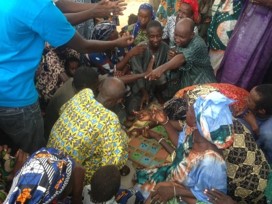 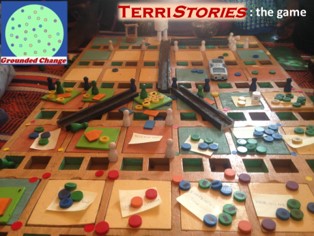