Home / Actions supported / Projects / Establishment of a new platform for the analysis of the oxygen isotopic (...)
180-Plat

Establishment of a new platform for the analysis of the oxygen isotopic ratio in phosphate extracted from environmental samples : a new opportunity to unravel the rol eof biological processes in P cycling.

A new platform for the analysis of the oxygen isotopic ratio in phosphate extracted from environmental samples: An opportunity to unravel the role of biological processes in P cycling

Phosphorus (P) is an essential element for crop productivity. An alternative to mineral P inputs from fertilizers is to increase P cycling in soil, e.g. through the release of phosphate from organic P compounds. Such strategies could rely on a better use of soil engineers such as earthworms. However, contradicting results have been reported. The analysis of oxygen isotopes associated to P (18Op) is expected to unravel the role of biological interaction on P availability because it is affected by key enzymatic reactions such as the ones catalyzed by phosphatases.

Create a platform for the purification of phosphates extracted from environmental samples for isotope analyses. Apply 18Op to an ongoing agroecosystem experiment performed in the Macrocosm platform of the CNRS Ecotron facility, which investigates the impact of the biological activity of two earthworm functional groups: endogeic earthworms and anecic earthworms. Identify the possible effects of earthworms on P bioavailability and on the composition of organic P (Po) in bulk soil and soil from biogenic structures.

The main output of this project is the creation of a platform dedicated to the purification of phosphate extracted from soils and other environmental samples for 18Op analysis. This will be an opportunity to contribute to the further development of this tool, which is still in its infancy. The main results show: i) different speciation of Po in fresh, old casts and bulk soil and differences in fresh casts between functional groups; ii) a negative shift in the 18Op of available P in endogeic earthworm fresh casts; iii) an increase in the available P in old casts compared to fresh casts and the bulk soil, probably originating from the microbial compartment. These results altogether indicate enhanced microbial activity, in fresh than in old casts and bulk soil and increased Po mineralization indicated by the depleted 18Op value. Hence, our results strongly suggest that different functional groups of earthworms do not trigger the same processes to increase P bioavailability from soil Po.

The approach we propose, relying on the measurement of 18Op in phosphate, appears as a promising alternative to assess the importance of organic P mineralization without using P radiotracers and ultimately to understand which biological mechanisms could be used to improve P availability for crops. 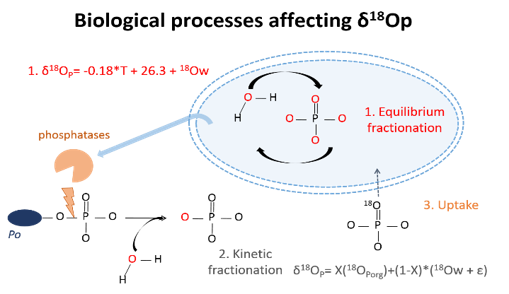 Research units in the network : BPMP