Brown rot caused by Monilinia spp. provokes dramatic losses of fruit. In Southern Brazil, the crop losses, after harvest, can be higher than 25%. In France, damages reach the same order of magnitude depending on the year.

The project aims to contribute to develop sustainable ways to fight against fruit brown rot by helping i) to define new targets of selection and identify new sources of resistance in breeding programs and ii) to guide biofungicides development. The objectives are to describe the variability of secondary compounds of peach fruit within a Brazilian collection and a French progeny, in order to decipher their genetic control and identify secondary compounds that could play a role in the control of brown rot. In vitro tests are willing to test the fungicide activity of the latter. The association and QTL analyses aim to identify loci related to resistance and provide tools for the implementation of marker assisted selection.

The project made it possible to supplement the existing infection data sets of both populations. Genotypes with null infection for repeated years were identified. Epidermis and flesh compounds were analyzed by HPLC analyses for two years. Results proved to be highly repeatable. For the first time in peach, were identified some derivatives of triterpenoids and phenolics described as cuticular compounds embedded in waxes with free terpenoids. GWAS and QTL analyses allowed identifying loci linked to brown-rot susceptibility and phenolic and triterpenoid compounds. The comparison of the results led to identify candidate genes linked to the metabolism pathways of secondary compounds. The correlations between compounds and resistance to the fungus led to compounds potentially inhibitor and elicitor of brown rot. In vitro protocols were developed to investigate the effect of these compounds, including apolar ones, on growth and reproduction of M. laxa and M. fructicola. Preliminary results led to identify compounds that promote or reduce mycelium growth or spore production.

Complete and robust datasets were produced. There is a great genetic variability in the material studied that will feed breeding program for brown rot resistance and allow to progress in deciphering the genetic control of secondary compounds. In vitro tests developped will allow to conclude on the fungicide activity of the secondary compounds investigated. 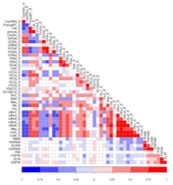 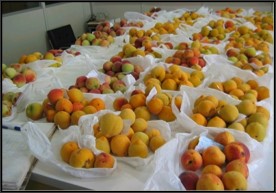