Analyzing the picking practices about a native resource / and general policy

Build a model of population dynamics

The study area was chosen: PA-Benfica, municipality of Itupiranga, state of Pará, Brazil. In 2013, 2014, 2015 and 2016 a population structure measurements of the babassu palm tree were carried out in 25 transects among 3 environments: pastures, secondary forest and primary forest. In parallel, the choice of the model type fell on the Bayesian hierarchical model. The socioeconomic data have been collected on the field in 2014 and 2015 in Benfica, but also in two nearby communities (Cuxiu and Borracheira) and in three other communities (Santa Rita, Itamerim and São Raimundo) in the Brejo Grande municipality. We carried out a work that make a link between the palm trees location information in situ and an algorithm based on very high spatial resolution satellite images used for their automatic detection. Land use history between 1987 and 2007 was rebuilt using Landsat satellite images.

In Benfica the babassu is an alternative resource for the family and can sometimes bring a significant income. However, its invasiveness makes it a species threatened by fazendeiros and sometimes even by family farmers (Macedo, 2015). The implementation of protective measures, in order to continue its use, requires ecological knowledge of this species and particulary concerning its population dynamics. In this context, we build a multinomial hierarchical model based on aggregated data (sum of individuals per stage) wich can integrate the hierarchical structure of te data. This approach is part of a Bayesian analysis of the modeling framework with MCMC algorithms for the estimation of mortality, growth and recruitment rates. Mortality and growth rates are estimated for the six biological stages of the babassu life cycle (Sirakov, 2016, Sirakov et al., 2016). Les résultats obtenus montrent une forte variabilité inter-annuelle pour le taux de mortalité lors du stade 1. The values obtained are significantly lower than the estimates published by Anderson (1983) and Anderson and Balick (1988) for another experiment in Brazil. For subsequent stages mortality rates are very low. With the exception of the transition between stages 3 and 4 (less than 1%), the transition probability is significant (10% to 28%). As a result, these results showed clearly a bottleneck in stage 3. This bottleneck may lengthen the number of years needed to adult age. This model can simulates possible population changes for the next 5, 10 or 15 years, with 0, 10 or 25% fruit harvesting. At the same time, our research in remote sensing (CNES / TOSCA CIC-TOOB research project) has enabled us to develop an algorithm for the detection of palm trees with a large circular crown, including the babassu in the open areas (pastures with low and medium density of palm trees) (Demagistri et al., 2014). This algorithm allowed us to make a map of palm trees densities in the open areas of Benfica for 2013. From both, our field data and this map, we were able to calculate the density of babassu palm trees on the Benfica’s area (Santos et al, 2017).

After studying the population dynamics of the babassu and its related socioeconomic factors, the logical follow-up of our work will be to analyze the relationship between babassu and the cultivated systems in Amazonia (pastures and food crops). This research work will take the form of a new PhD (perhaps Brazilian) with field work on the same site of study (PA-Benfica). Another priority research line for the management of babassu will be to study its spatial distribution and its evolution over time to quantify the availability of the resource. After the development of an algorithm for the detection of palm trees with a large circular crown in the open areas, it will be necessary to produce an algorithm wich can be able to detect the crowns in a closed areas (like forests) and to detect specifically the babassu. To achieve this result, will be necessary to make simulations on satellite images with better spatial resolution than those available actually (CNES / TOSCA 2017 research project accepted). These simulations require the creation of scenes from 3D models of the babassu palm tree. We propose to create in research project submitted to call for proposals in 2018 (UMR AMAP, UMR ESPACE-DEV, UMR MISTEA). In this new project we propose to mobilize the model of the population dynamics of the babassu (created in the project AF 1202-072, 2014-2017) in order to spatialize it. We also concider to modelize the spatial distribution of some development stages of the babassu palm tree. 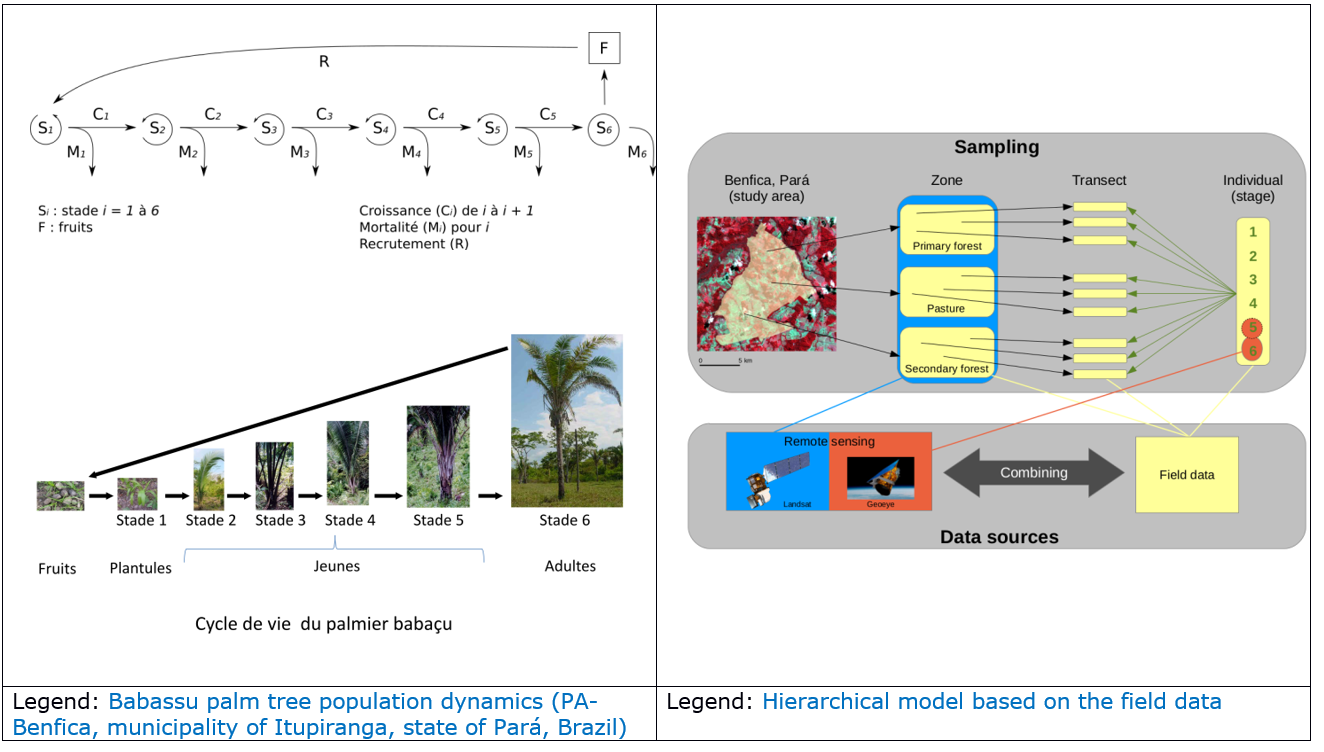 Research units in the network : CEE-M