The Banana and Enset Xanthomonas Wilt (BXW/EXW), caused by Xanthomonas vasicola pv. musacearum (Xvm), constitutes a emblematic case of emergence affecting all Eastern and Central Africa. This disease was first reported in Ethiopia on several hosts (enset and banana), and is considered as the presumptive center of origin of this devastating disease. Understanding the ethiopian case is a key step for a efficient regional BXW management.

The project was actually focused on access to biological resources in Ethiopia. We first aimed to establish the process for compliance of microbial resources to the Access and Benefit-Sharing rules of the Nagoya protocol. This approach was followed by scientific partners of both countries (France and Ethiopia), as well as with juridic experts. An extensive survey was then performed within the main Ensete and Banana cropping areas, collecting both diseased plants and informations on the agricultural and epidemiological context of each site.

The Internationally Recognized Certificate of Compliance (IRCC) was obtained from the Ethiopian Competent National authority in September. The survey was performed from September 11 to 27, under a hypothesis-driven sampling plan. Surveyed sites thus included regions of very ancient B/EXW history, sites with presence of wild enset nearby enset fields, sites where enset is cropped in association with maize, regions where both enset and banana are cropped (in the midlands). During this 2800 km journey, 33 sites were sampled, GPS-localized, and surveyed for cropping and epidemiological context. the bacterial collection gathered, consists of 332 bacterial samples isolated from diseased enset, banana, and from asymptomatic maize, sugar cane, potato.

The Ethiopia Xcm collection presented is a milestone for all downstream activities on genetic diversity of the pathogen, and for future researches for the development of an international initiative on XCM diversity and epidemiosurveillance. Future research prospects include population genetics and genomics of host specialization and host jump, contribution of the alternative hosts (Poaceae in that case) to EXW/BXW emergence, genetic bases of pathogen virulence and host resistance. 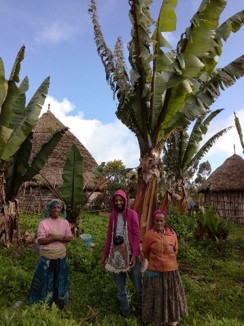