The SAADA project addresses the possibility of better using agrobiodiversity, especially of cereals, legumes and trees as leverage for the ecological intensification of water use in Mediterranean rainfed agroecosystems. Although the genetic diversity is increasingly investigated in the South Mediterranean, the functional agrobiodiversity associated to the wide range of crop varieties is still poorly known and used for the design of innovative diversified agroecosystems with high water productivity. The SAADA project will initiate a multidisciplinary research program on the functional agrobiodiversity and its relationship to water productivity in the Pre-Rif region, Northern Morocco. Based on field observations, experimental work and modelling activities, the project will provide new basis for the definition of crop functional ideotypes and "ideo-systems", including agroforestry systems, with high water productivity in the Mediterranean drylands.

The main objectives of the project will be : (i) to assess the agrobiodiversity (cereals, legumes, cultivated trees) in the Pre-Rif region using both genetic markers and plant functional traits; (ii) to specify how the diversity of crops and trees are combined and managed by farmers into complex agroecosystems; (iii) to test whether the genetic and functional diversity of crops promotes the functional complementarity of water use in crop mixtures, including trees or not, under contrasting water regimes.

The main hypothesis of the SAADA project is that the genetic and functional diversity of crops can promote the complementary use of water in space and time, therefore resulting in the ecological intensification of water-use. In order to identify what combinations are the most beneficial under water-limited conditions, the project aims at investigating the existing diversity of rainfed agroecosystems in the Pre-Rif region, well known for its long-lasting evolution of agricultural systems and its high agrobiodiversity, as empirical source of knowledge and to explore innovative combinations of varieties based on deeper knowledge of crop genetics and functional attributes. The underlying assumption is that farmers have intentionally used, organized and managed the regional agrobiodiversity to adapt to local abiotic, biotic and socio-economic factors and therefore that the selected crops and varieties associated together, with or without trees, have the most adapted behavior to plant-plant interactions according to farmers’ perception. Our contribution will be to identify the mechanisms associated with the selection of crops and varieties in mixed cultivated stands regarding water-use and to provide the genetic and functional determinants of improved crop mixtures.

The project addresses the following question: “how far can the genetic and functional diversity of crops contribute to improve the rain water productivity of agroecosystems under severe water-limited conditions?”

Specifically, the project has the following objectives: (i) identify the regional species, genetic, and functional crop diversity based on a representative range of agroecosystems involving cultivated trees, legumes and cereals in the Pre-Rif region, Northern Morocco; (ii) specify how the crop species, genotypes and functional traits are selected and combined by farmers, intentionally or not, in relation with local water availability, the structure of the agroecosystems (e.g. tree-crop mixtures, crop succession) and their farming objectives; (iii) understanding the role of the genetic and functional diversity in mixed cultivated stands in the use of water under contrasting water availability conditions; (iv) defining crop ideotypes specifically intended to be associated in mixed cultivated stands based on plant functional traits, and to identify relevant assembly rules for designing “ideo-systems”, including trees or not, with high rain water productivity.

Four main activities have been conducted during the project: (i) we synthesized nearly 20 years of research on wheat and faba bean agrobiodiversity and (ii) we surveyed 72 traditional olive-based agroforestry systems in the Pre-Rif region (Morocco); (iii) we tested 220 different wheat varietal mixtures (France) and (iv) 100 wheat + faba bean associations (Morocco) in field experiments. We reveal that agrobiodiversity of wheat and faba bean is particularly high in the Pre-Rif region with a wide variation of phenotypic traits and yield, especially for faba bean (62 varieties). Agrobiodiversity has been managed by network of farmers with a high rate of local seed selection and sharing. In the same region, we showed that agroforestry systems based on olive, cereals and legumes have a higher level of resource-use efficiency compared to monocrops, especially those with faba bean for which productivity increases by almost 70 %. Similarly, productivity increased in wheat varietal mixtures (+ 4 %) and wheat+faba bean associations (+12 %), especially under water-limited conditions.Although the varietal composition had a significant impact on overyielding, traits like plant height, leaf and root morphology of monocrops only explained a modest part of it. We stress that the phenotypic plasticity of traits within crop mixtures should be better accounted for in future research.

The SAADA project initiated a series of research work on crop phenotypes in crop mixtures and agroforestry systems which aim to define relevant traits to select and their source of variation (e.g., european projects D4DECLIC, BIODIVERSIFY). 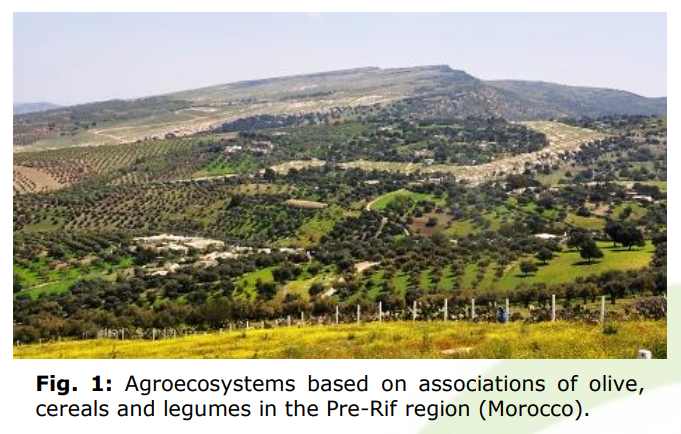 Research units in the network : AGAP