The Icowpea project(2017-2020) aims to develop technological and organizational solutions to market innovative cowpea-based products of high nutritional value and meet local demand in Benin through a participatory and multidisciplinary approach. The project works with women artisans and SMEs, via an innovation platform. The challenge is also to support and perpetuate the artisan urban food activity, which is essential in supplying the precarious populations of the cities. Cowpea is a legume with a high protein, mineral and vitamin content. But poorly controlled processing is nutritionally harmful: loss of the components of interest (essential for cell growth) and maintenance of anti-nutritional factors, sources of intestinal disorders and therefore a brake on consumption. A strong research partnership has been established between teams from the South (in Benin, the Faculty of Agricultural Sciences (FSA) of the University of Abomey-Calavi and the Laboratoire d’analyse régionale et d’expertise sociale (Lares)) and from the North (IRD / UMR NutriPass and CIRAD / UMR Innovation and QualiSud).

1. What are the main results of your project?

Improved knowledge of cowpea processing know-how and processes. The researchers characterized the processing methods of the two main forms of cowpea preparation in Cotonou: abobo (stew) and ata (doughnut). Two theses (one of which is still in progress at the IRD) were associated with the characterization work and studied the impact of the different unit operations of the process, more precisely on the (anti)nutritional factors of the preparations (preservation/loss of vitamins B9, digestibility according to the different steps of soaking, grinding, cooking, beating of the dough, frying, etc.). Experimental designs were conducted in laboratories in Cotonou (FSA) and Montpellier (IRD and CIRAD) and led to the development of models of cowpea seed behaviour during soaking/cooking (abobo) or during threshing and frying of cowpea paste (ata). At the same time, the development of models and the identification of environmental (e.g. carbon footprint), economic (e.g. energy cost, product cost price) and societal indicators (e.g. product acceptability, ergonomics of process implementation for craftswomen) have ultimately led to a multi-criteria approach to process sustainability optimization.

Knowledge on the characteristics of the food craft sector in Cotonou Surveys carried out in Cotonou have identified nearly 2,692 women artisans, 68% of whom are abobo producers and 32% of whom are ata producers, who supply the city’s consumers on a daily basis. This craft, which is exclusively feminine, employs older craftswomen with an average of more than 10 years’ experience in the trade and generates more than 4,500 jobs. In addition to the 54 tons of cowpeas that they process per week in Cotonou alone, these craftswomen also value a wide variety of products (yam, sweet potato, aloco, gari, voandzou, etc.).

Updating knowledge on cowpea consumption in Benin Promoting the use of local cowpea dishes to combat micronutrient deficiencies required, among other things, a good knowledge of their actual level of consumption. To this end, a cross-sectional survey was conducted among a sample of 641 adults (between 19 and 65 years-old) in the city of Cotonou (urban area) and 576 adults in Adjohoun and Allada (rural areas). This study aimed to collect information on the socio-economic level of the household, on the various legume and cowpea-based dishes consumed and to assess their consumption frequency. The contribution of cowpea dishes to meeting the nutritional needs of the adult population was then calculated, based on the nutritional compositions analytically established by the FSA and IRD. The study showed that cowpea is a legume that is widely consumed by the population (1 to 3 times a week by adults) because only 2% of respondents declared themselves as non-consumers. Nine cowpea dishes were identified, with varying consumption frequencies. Respectively 72% and 60% of cowpea consumers consume cowpea in the form of stew (Abobo and Vêyi variants) and doughnuts (Ata and Ata-doco variants). Thus, these dishes make a significant contribution to covering the needs for protein, fibre and vitamins B1 and B9. However, digestive discomfort is one of the main reasons for limiting cowpea consumption in all the areas surveyed.

2. What are the project’s innovations?

An innovation platform to start a professional structuring process. In the absence of a professional organisation, we supported the implementation of a multi-stakeholder innovation platform. This platform, called "Aïdoté" ("awakened spirit" in the Fon language) brings together some fifty members, including craftswomen, SMEs (manufacturers of flour and stabilised products) and institutional players (municipal services, neighbourhood leaders). This platform has made it possible to initiate exchanges and collective action between artisan women when they were isolated and acting individually. It has also made it possible to initiate a dialogue with the municipal authorities when these women are most often victims of "eviction" operations and are driven from the pavements and public space where they carry out their activities. This multi-actor system enabled the artisan women to discuss, with the researchers, possible scenarios for change in organisational and technical terms and to evaluate the proposals they were experimenting with (processes, tools, equipment) along the way.

First edition of the Cowpea Day in Cotonou to promote women artisans and the concrete results of the project. The first edition of the "Journée du niébé, Aïzan" was held on 4 December 2019 in Cotonou, at the initiative of the Icowpea project and members of the innovation platform. Cowpea transforming artisan women from the Aïdoté platform were at the centre of this event. The activities carried out on the structuring and professionalization of the craftswomen, the optimization of processing methods, the improvement of the nutritional quality of cowpea products and their adaptation to the expectations of Beninese consumers were presented to the public and the authorities.

Development of a mobile unit prototype for the production and sale of ata, to transform the visual identity of artisan women in the urban landscape. Researchers and artisan women, with the contribution of an equipment manufacturer in Cotonou, have participated in the development of a mobile device for the production and sale of ata enabling artisan women to work in a clean, reliable and more sustainable working environment. This device also contributes to assert a positive visual identity vis-à-vis the municipal authorities and consumers and to promote their products which are part of the culinary heritage of the city of Cotonou. This equipment includes an improved cooking stove that uses agricultural residues (carbonised palm nut shells), thus limiting the consumption of firewood and toxic smoke emissions. A prototype was presented to the public on the first cowpea day of 4 December 2019 in Cotonou. The equipment was then tested by the craftswomen, in real production situations, in order to identify difficulties in use, design errors or defects and possible areas for improvement. Cotonou’s local authorities have shown great interest in this equipment, as have the consumers associated with the tests. They say they are ready to support an experiment on several sales points in the city. 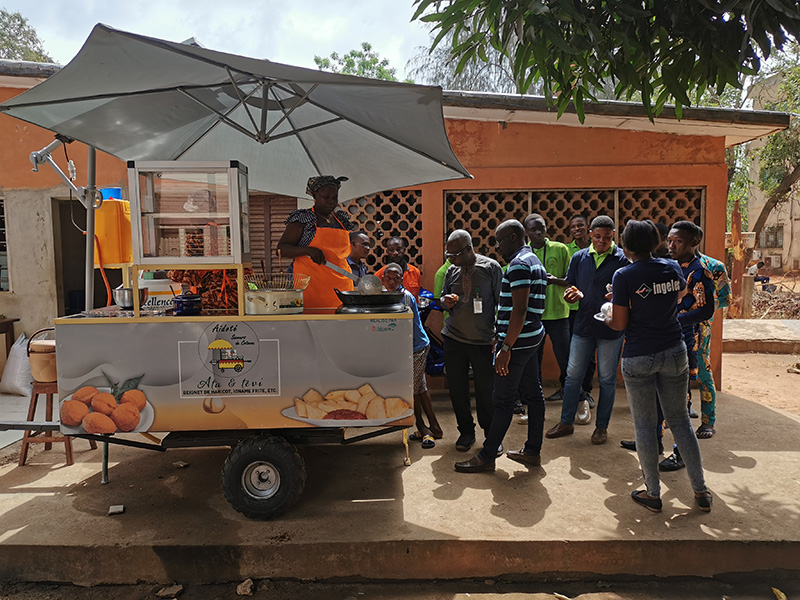 Process improvement, development of intermediate products and new finished products Iteratively, different technological solutions were tested with the artisan women and in the laboratory. Thus, for the production of abobo, the tests, still in progress, concern the sensory evaluation by the craftswomen of an abobo obtained from pre-soaked and dried cowpea. In the case of ata production, optimisation of the pre-soaking time has effectively improved the nutritional quality and digestibility of the product. Other options have also been tried, such as the use of intermediate products such as cowpea flour or husked cowpea by the artisans. These intermediate products made by an SME in Cotonou are giving convincing results in terms of ease of use and taste quality. In order to satisfy the preferences of certain consumers for crispier ata, trials of new forms of doughnuts have been carried out (donut type and churros type). Finally, the researchers were interested in the effects of the germination process that occurs after a long period of soaking cowpea seeds and its nutritional implications. Funding for a thesis is currently being sought to advance the research questions associated with this operation.

South-South partnership with Brazil to strengthen the professional organization of women processors Cowpea processing is a women’s activity which, in Benin, has hitherto had no form of professional representation. The platform was a first form of meeting allowing women processors to collectively discuss their craft. Little by little, the project made it possible to compare it with other similar corporations and to observe their organization modes. We thus identified a Brazilian organization of cowpea processors into "acarajé", an emblematic doughnut of Brazilian cuisine descended from the Beninese ata. This organization, the Associação Nacional das Baianas de Acarajé (Abam), is highly structured, has 8,000 members and holds a very important social, economic and political weight. The project enabled its representative to attend the Cowpea Day on 4 December 2019. She also took part in many stimulating meetings for the platform’s craftswomen, during which the women were able to discuss both organizational issues and relations with the authorities, on products and processing practices. 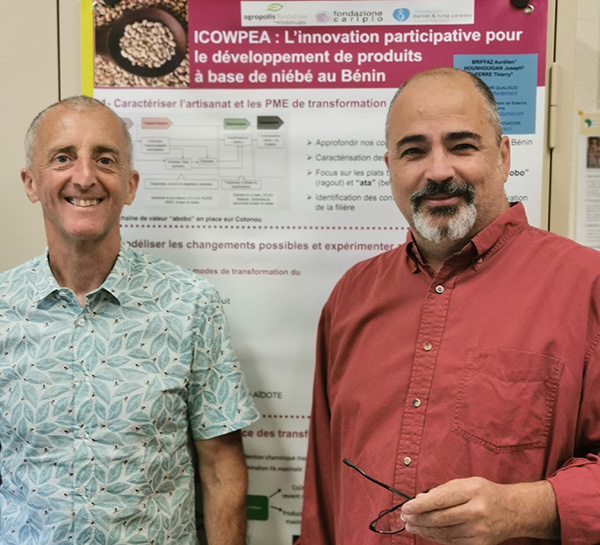