On 9 November 2009, the Foundation launched the first edition of the Louis Malassis International Scientific Prize for Agriculture and Food, in partnership with the Languedoc-Roussillon Region, which made a financial contribution of €20,000. 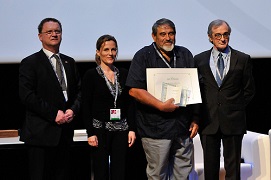 The Prize was awarded to Ken Sayre, Agronomist from the International Maize and Wheat Improvement Center (CIMMYT, Mexico) in the Senior Scientist category and to Sylvia Restrepo, Plant Pathology Researcher from the University of the Andes, Bogota in the Young Promising Scientist category.

Ken Sayre has developed agronomic methods to improve soil fertility and limit soil erosion while reducing the use of fertilisers and irrigation. These methods are now widely used in Latin America, Central Asia, India and China.